In 1996, thanks to Volunteer Volunteer Dominik Schlun and Slavic studies student Margarete von der Borch, work began at the Orphanage No. 4 in Pavlovsk. At that time the situation in the orphanage was grim: almost two hundred children with severe developmental disorders were living in the fourth building with only a few medics to care for them and security guards on duty. The children were considered to be "irremediable", so they were not taught anything: an endless "quiet hour" was prolonged from morning to night, day after day. The children were in dire need of specialists in development and rehabilitation.


For 4 years from 1996 to 2000 Perspectives developed programs and led activities in the 4th building. Our first volunteers and pediatric specialists joined our team. The death rate of children living in the 4th building rapidly decreased: from 52 to 35.


In 1999, the "Little School" was created, which gives the children knowledge and skills, which they would usually acquire from their families. The children’s interest in our programs and their developmental successes amaze both us and the staff of the orphanage. In 2000, a "Garden" is added - a space for play and communication, for meeting different interesting people, and a wonderful place for preparing the most active children for their future courses. Throughout the ten years of the project’s existence, more than 50 children have learned to walk, to move around in wheelchairs, and pronounce their first words. Then we opened our first “Adaptation” group, which provides "new" children, who have just arrived in DDI, increased attention, better care and support. By 2002, the mortality rate at the orphanage was reduced to 18 people per year. 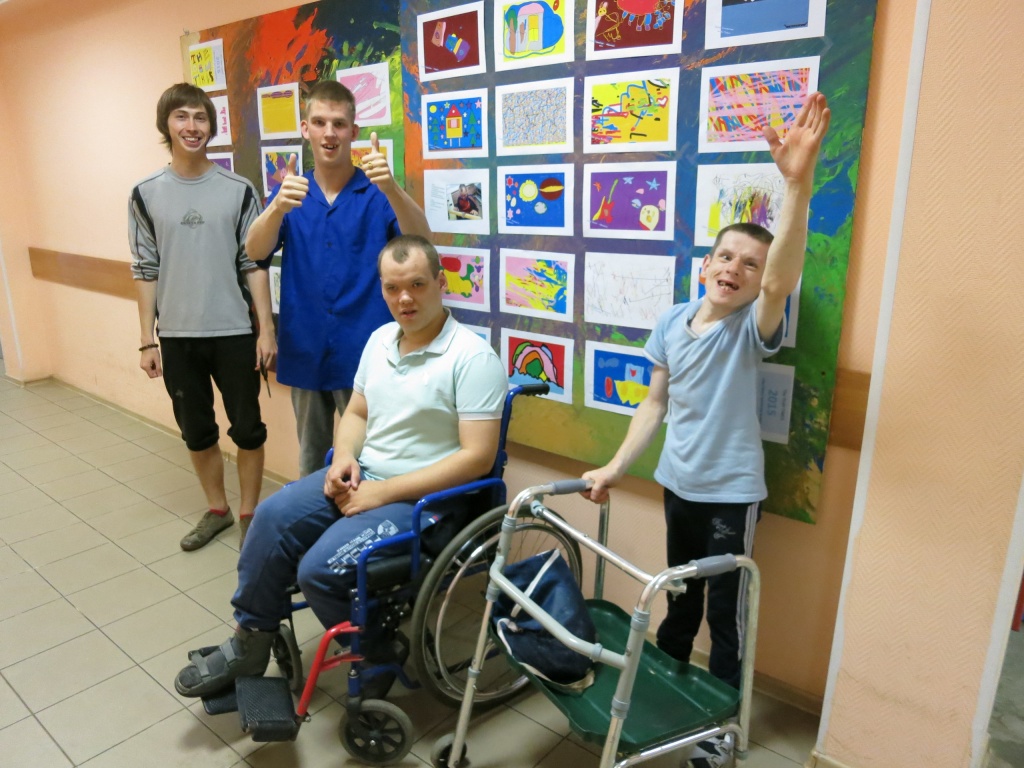 
In accordance with the state program, after reaching the age of 18, children are to be transferred to a boarding school for adults, for the rest of their lives. Maria Ostrovskaya, a psychologist with experience working in private institutions, managed to convince Alexander Ilyin, the head physician of one of the boarding schools, that something must be done for our children even after they reach eighteen and adulthood; that they shouldn’t be left to the whims of a broken system. So with Alexander Ilyin’s permission, we accompanied our “graduates” to boarding school № 3 in Peterhof and started a new program there for adults who suffer from mental and physical disabilities. Before we got to Peterhof, the patients were just left to their own devices throughout the day. Many would wander throughout the halls of the building or stay alone in their rooms with little to no assistance or supervision. So our first challenge was figuring out a way to occupy their time while providing them with a structure in life that was connected to the world they had been shut out of.


2000 - Actress Elena Schiffer created a theater studio to stage performances: the art of the theater became a lifeline that gave many of our patients' freedom of expression and communication and allowed them to indulge in the spark of creativity.


2001 - An art studio opened in boarding school No. 3, which over the years has become a window into the bright and deep world of about 40 of our wards. Works of artists involved in the studio have participated in more than 50 exhibitions and promotions, are now in private collections and were highly appreciated by art critics.


2002 - A “cafe” was opened up at our Peterhof campus - a room where patients learn how to cook, set the table, and can gather friends to celebrate a birthday party - or just each other’s company. The “cafe” has been an incredible source of joy at the institution, both for the residents and our staff.


2005 - A resident council was formed for the boarding schools in which Perspectives works. The children themselves are the councilmembers and get to solve the issues that confront them every day. The children work together on the councils to identify their needs and cooperate with each other to find solutions to their problems. The resident council has since become a well-known method of self-management and self-help for disabled people living together. At the same time, in PIS # 3, work begins on the creation of a new branch of the resident council for the students of Perspectives - “Houses for Normal Life and Work,” where young men and girls live side by side, and staff of the state institution who have been trained for two years works with them.


2006 - A computer literacy course was added to the lessons in boarding school No. 3. Today in "Computer class" children learn not only to print and draw on the computer but also how to publish their own newspaper and record electronic music.


2007 - Our Perspectives theater studio started working with the Swiss integration theater IlguillaridiGulliver on the international project "Theater without Borders". During the years of the project, unique performances "Time Without Words", "Walking" and "Lullaby of the Wind" were created and presented on stages in Russia, Germany, and Switzerland, and in July of 2016 our collective’s new play, “Here and Now,” premiered in Hamburg.


2009 - Perspectives started a new assistance program designed for our weakest children. Twelve of our children most in need of assistance were given a curator - a person who works personally for them not as a volunteer, but as a professional, and is responsible for all aspects of their lives: classes, leisure, health.

In 2010, we started a program with "Saturday volunteers" who come to the children in boarding school # 3 on weekends - our volunteers cheer up our students and help them with their studies, play games with them, and make them feel valued.


In our work, it has become clear that the best way for children with special needs to get help is for them to remain with their families. Once children are taken away from their families they are at the mercy of the state system and the results are often tragic. To help turn the tide of people who leave their children to be cared for by the state we started a project to help keeps families in crisis together and formed the "Family Support" program.


2003 - Our wards were able to leave the institution for the first time! We took our children on a getaway in the country. Together with the Sunny Island organization, we were able to organize a trip for the children to an equestrian camp, and our older students from Peterhof were able to go to a camp on the Finnish Gulf. The was the first time our students had spent a significant amount of time away from their facilities, and they loved it. To this day everyone looks forward to our summer camps.


2004 - We opened the first center that helps children from families in Saint Petersburg.


2006 - Our daycare center for children from families became a "School for Everyone," and was joined by two classes of the correctional school number 25. For the first time, children with disabilities get to go to this school! Their teachers are all from Perspectives. In the same year, in the new premises on the Kutuzov Embankment, transferred to Perspectives by the city for free rent, we opened our second daycare center. There, children with severe disabilities over 18 years old are engaged in housekeeping, creativity exercises, and adaptive physical education. 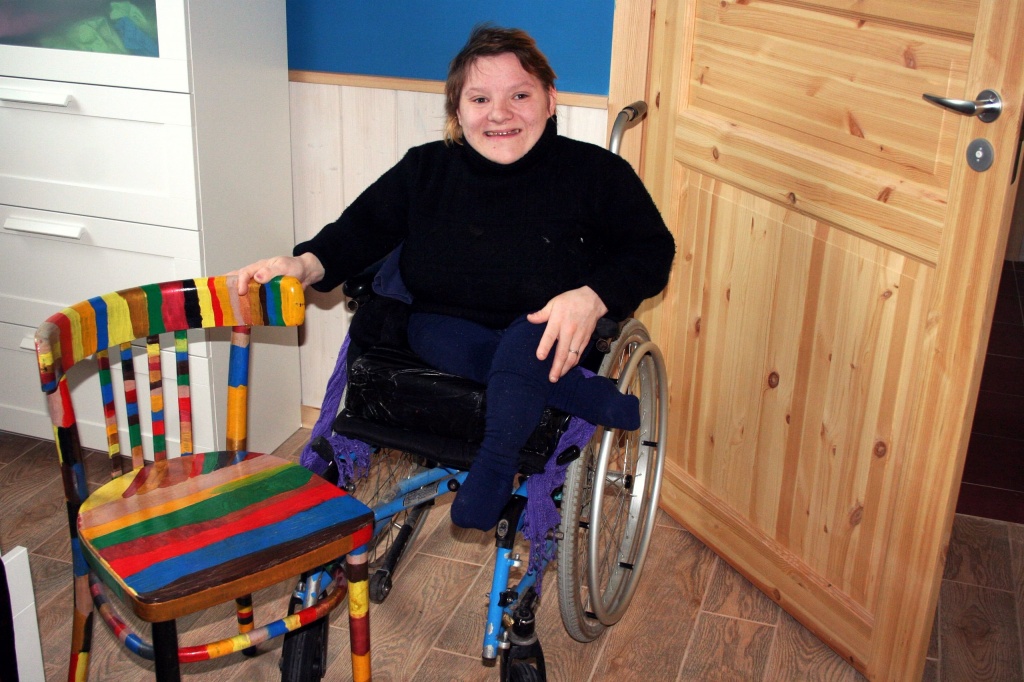 ON THE WAY TO LIFE OUTSIDE OUTSIDE THE INSTITUTION


2011 - The first 10 children of the Children's Boarding School No. 4 from the Department of Mercy of the 4th Corps were enlisted in the state correctional school, and their teachers from Perspectives receive the status of home-based teachers. This is the beginning of a great journey of children from once closed boarding schools into real life.

In 2011, Perspectives opened a center for the preparation of special needs children living in families, to study in correctional schools. In total over the past several years, more than 20 graduates of the center entered the school! To help in acute, crisis situations, the Guest House was created where children can stay in a safe and developing environment and make new acquaintances - while their parents deal with serious crises.


2013 -For the first time one of the graduates of Perspectives, Mary, managed to obtain an apartment on her own. In the winter of 2014, she moved to her apartment, which volunteers helped her furnish, graduated from evening school and entered university.


2014 - Perspectives began to hold legal seminars open to everyone living in any of the 8 psycho-neurological boarding schools, where residents are told about their basic civil rights.


2015 - Perspectives started a class for teaching children from the Psychoneurological boarding schools of Peterhof and Strelna in the Petrodvorets evening school. Four of our students enrolled and provided an example for the rest, with another 10 people expressing a desire to go to school!

2015 - In the Leningrad region, Perspectives created a home for special needs children who require accompanied living. The goal of the project is to create a small community, where several young people with mental disabilities (5-6 people) can live in a prepared and disability-equipped home.


2016 - In February we opened our “Training Apartment”: the first project in St. Petersburg for the preparation of young people with severe disabilities from the psycho-neurological boarding school for accompanied or independent living. For the first time, children with severe disabilities from boarding schools will try to live on their own - with the support of an experienced teacher - for 4 months. One of the graduates of the project in 2016 got his own apartment in the city.


In 2012, Perspectives received a medal "for unselfish work in the care of children" from the Commissioner for Children under the President of the Russian Federation.


Perspectives’ annual report in 2011 was recognized as the most transparent and complete among the largest public organizations of Russia by the Ministry of Justice of the Russian Federation.